It's been quite some time since I've given an update on Pathfinder Adventures and for that, I am deeply sorry.

In that time, the team has had some changes in both priorities and members. In the end, though, we have continued to work on making Pathfinder Adventures more accessible to existing users and to hopefully expose a new group of gamers to the world of Golarion and the iconic characters that travel within.

Some of you might be saying, "Hey, why did we have to wait so long for a patch?" and, "Why didn't you update us more often?"

We wanted to give the players the best PC experience with Pathfinder Adventures. To keep this from being considered just a mobile port was an enormous amount of work and required us to focus a majority of energy and attention for it to become a reality.

It's not a super awesome answer but it is the truth. I think when I have burned my last bridge and finished writing my book (I was thinking of calling it Production: How The Sausage Is Made And Other Stuff And Things With Lots Of Capital Letters But No Commas) I will be able to explain the twists and turns the last few months have had.

The one constant that remains is the dedication the team has for the project and making awesomeness.

"Flounder, enough! We only want to know two things: What's in patch 1.2.6 and how did you get your cool name?"

The interface has been PC-ified. This was no small feat. If we had released a straight port of the mobile version we would have been flambéed. The team added hotkeys, scrollbars, and scroll wheel support that folks will be able to pick up on GoG, Steam, and the Mac Store.
The pricing for the PC/Mac versions will initially differ from the mobile versions because we don't use in-game purchases, rather there is the availability of DLC for some elements, but when you buy the base version of the game you get the entire Rise of the Runelords content.
For reference, the base version of the game will have all the decks and cards that are in the original Rise of the Runelords bundle, plus all the Uncommon and Rare Treasure cards. Two DLC packages will be available; one with all the iconic Alts and some legendary dice and the other with the rare epic and legendary Treasure Cards and some legendary dice.
The Obsidian Edition comes with the base version, the two DLC packages, three promo cards (two of which are Edér and Pallegina from Pillars of Eternity, yeah!), three legendary items, a bunch of runes/charms/gold, and a DLC pack that will be available in the near future.
We plan on keeping future content parity between all platforms so that if there is something that is available on the PC, the Mac, and mobile users will have it at the same time.
All platforms can use a single PlayFab account which means that all content and progression can be shared between them. 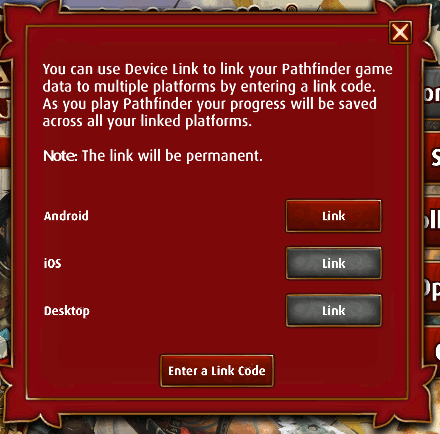 It used to be kind rough if a user spent a lot of time on one platform and when they got another they would have to start from scratch or contact support. It was doubly rough if they actually had a lot of content unlocked on each platform.
We say, no more! One account, all platforms!
We also tackled some of the
interfaces
that we thought were problems including the Party Creation and Character Selection screen. 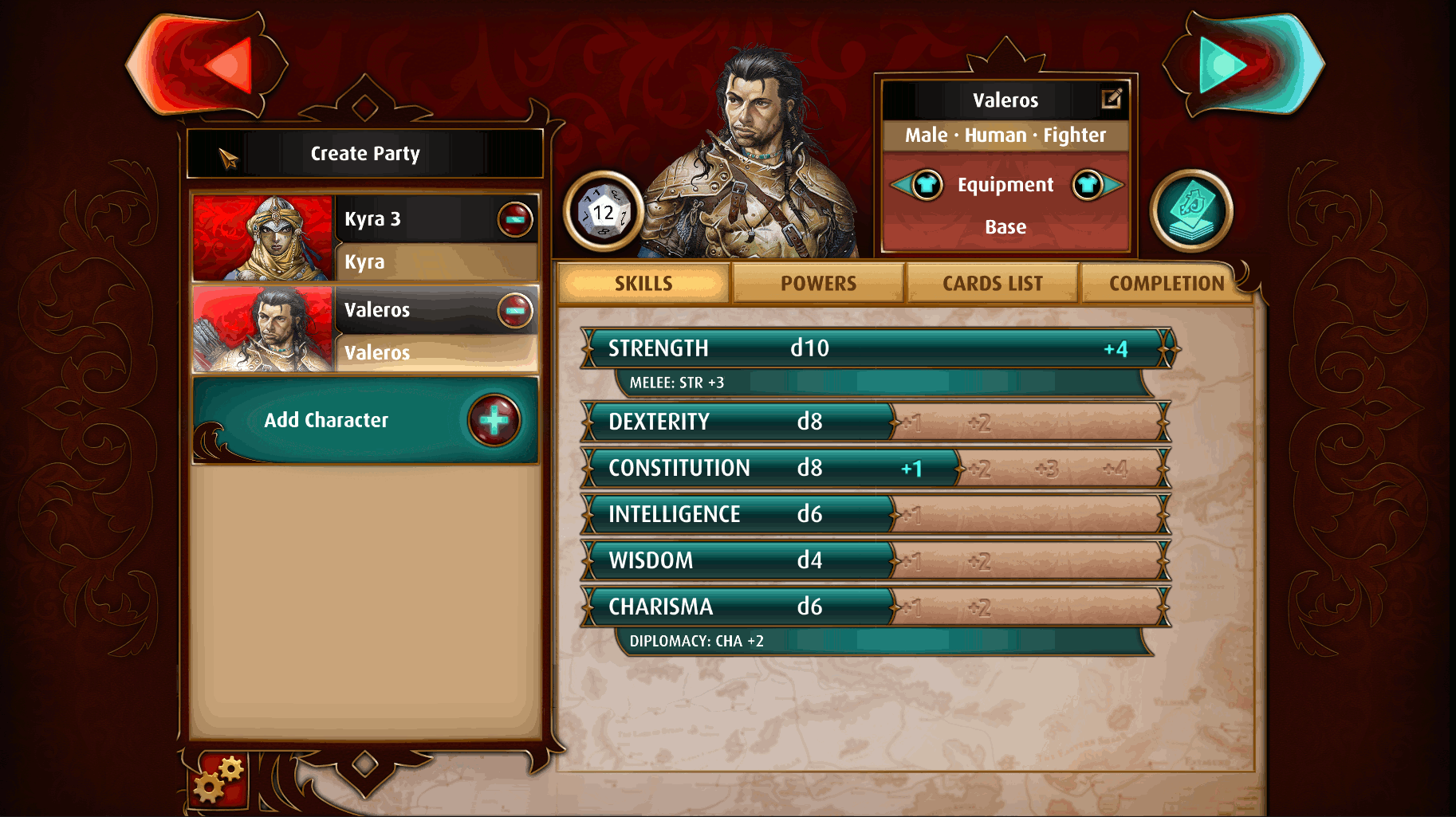 These changes will be reflected in all platforms and be a more streamlined process that, while functional, wasn't making a very good impression on newer users and tolerated by current players.
In our faithfulness to the original card game we had the exact same valid deck check in the digital version. To expand the content in the digital version we added Treasure Cards (these can be ignored in Story Mode for those that want the exact same card game experience) but unlike most card games, when you open a Treasure Chest you don't actually get a copy of that Treasure Card for immediate use instead you just get the chance to find it in your adventures.
It's kind of a hard concept to grasp unless you are familiar with the system and we have gotten a ton of feedback from the player who weren't. This addition will hopefully make it more gratifying when opening treasure chests and allow some players to hold on to some of those more specialized cards.
Aside from copies of the Treasures Cards going into the ether to be found a copy is sent to the Stash for immediate use.
This also helps alleviate the need for Mule characters that are solely created to store some of the less desirable cards for their current game progression. Plus, it is a bit more intuitive for the digital-verse.
The Stash is set at 10 slots right now and includes an Unclaimed tab. All cards in Unclaimed cannot be used by any characters until they are officially moved to the Stash. You can open up a hundred chests and all the new cards will be waiting to be moved into the Stash.
If you happen to go over your Stash limit you will then meet a happy vendor who will readily give you gold for your unwanted cards. 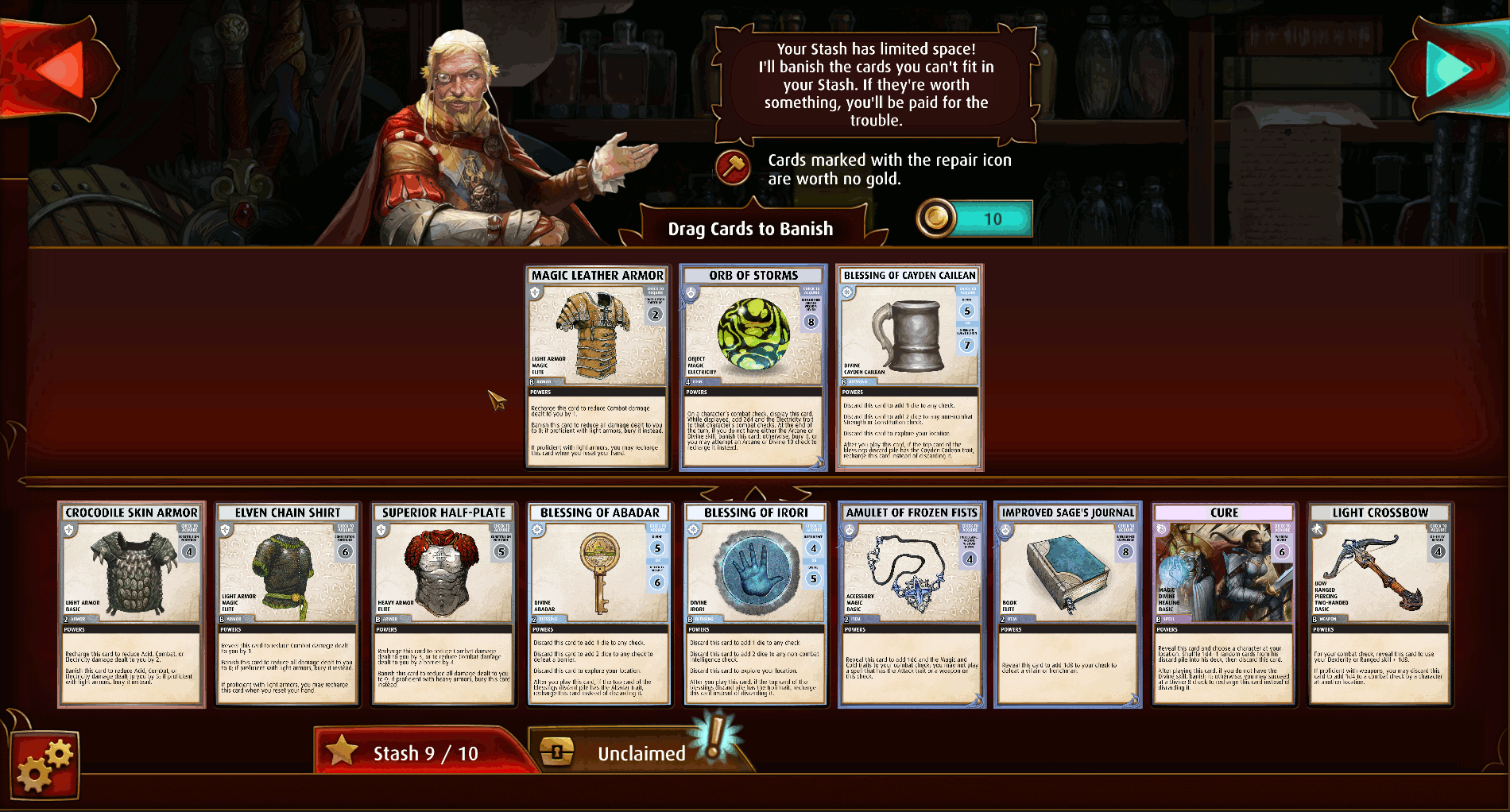 Ever have that roll you really, really needed to win or your permadeath character bites it or you are a turn or two away from kicking Ghlorofaex to the curb? We might just have the charm you are looking for.
Charms are one-time use consumables that have an immediate effect on your current action. They vary from adding a bonus to a check to adding turns to the Blessings deck. They have a gold cost associated with their power so a bonus d4 to a roll might only cost 50 gold but adding to the Blessings would run you 500 gold.
Runes differ from Charms in that they have a time limit associated with them and they almost act like a pseudo scenario power. The Rune of Wealth would double your gold acquisition while the Rune of Shielding would reduce damage by one for four hours.
These will all be available in the Store and during game play for in-game gold only but Runes have to be set up prior to entering the scenario. 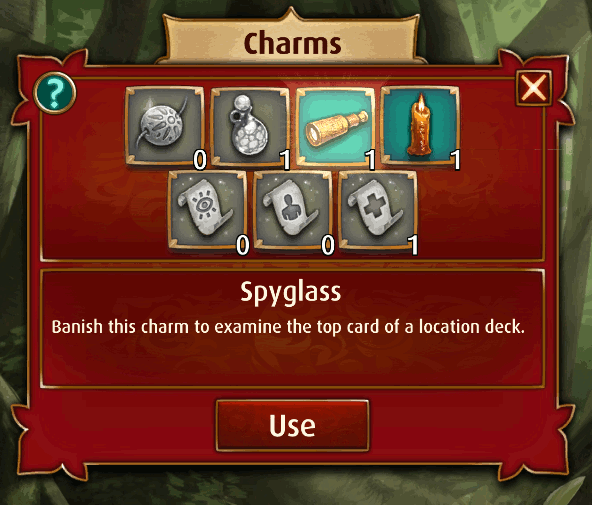 You might not think this is a feature as much as just another iteration but the tutorial was a requirement to play the game and a good three-quarters of the people who were forced to play it were never seen playing our game again. No kidding.
This super-RAD version of the tutorial is cut up into five bite-sized scenarios that teach very specific elements of the game in a clear and concise way. You even get special rewards for completing all of them. We don't consider just being able to play the beginning scenario a reward.
Also, now with 100% more skipping. Yes, that's right, if you don't want to play the tutorial or are already familiar with the game, we have a skip button that is just right for you. 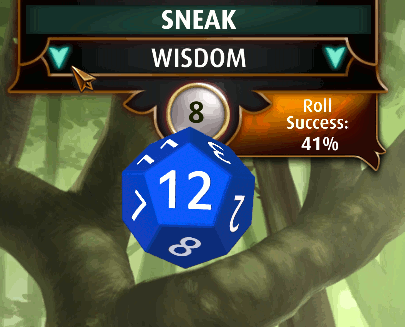 Yeah, you see that? Your chance of winning the check. I've confidently failed some 97% chance of success rolls but now I don't confidently go into the roll with a 20% chance glaring at me.
It's a minor feature but it honestly makes your decisions a little more clear and that one additional d4 that Lini can throw in there is actually a huge improvement.

1.1.6.5 - Sorry, that just didn't happen like we planned. It was supposed to do two things for us: Remove quest mode and grant people their rewards for checking it out as well as offer some additional Goblin alts to use all that ph4t cash on.
The Goblins are coming but we will include their availability when we do some content specifically for them. That announcement will be coming soon, I am sure.

Lots and lots of them have been fixed. Like a multi-page post that isn't part of this blog type of amount.
We seriously want to make the experience better for the players and invested a lot time to fix issues that were brought up.
I want to thank everyone that was involved with the actual creation of the content I just wrote about as well as you, the reader, for taking the time to read about our upcoming release.

Patch notes will be coming shortly. Those will likely be boring and not nearly as cool as this post or my name.

We also have a Dev Q&A tomorrow at 4PM PST on twitch.tv with yours truly! So don't miss it and post your questions here on the forums so we can can answer them on stream!