The Stone Giants are Coming!

I have some exciting news! The Fortress of the Stone Giants is just weeks away. When we last left our heroes, having saved the sleepy coastal town of Sandpoint multiple times (from bandits, a dragon, goblins, zombies and ghouls), they briefly turned their attention to rescuing Turtleback Ferry and Fort Rannick from ogres and flooding. Now they've returned to the coast to find "Sandpoint Under Siege."

The town is in the middle of an onslaught of Stone Giants along with the dragon, Longtooth, flying overhead (thanks to the animation prowess of Andre Nguyen). The card mechanics also simulate the destruction of Sandpoint. All of the locations in this scenario are unstable. Each turn a card is revealed from the top of a random open location. If it's a boon, it's destroyed by looting and burning. If it's a bane, it shuffles back into its deck to continue sowing chaos.

As always, when you complete every scenario in an adventure on Legendary difficulty, you get a new card in your vault! In this case, you will find a boon straight out of the Thassilonian Library where you end Adventure Deck 4. The way forward is dangerous, bizarre, and mysterious. As such, you'll need a good book! 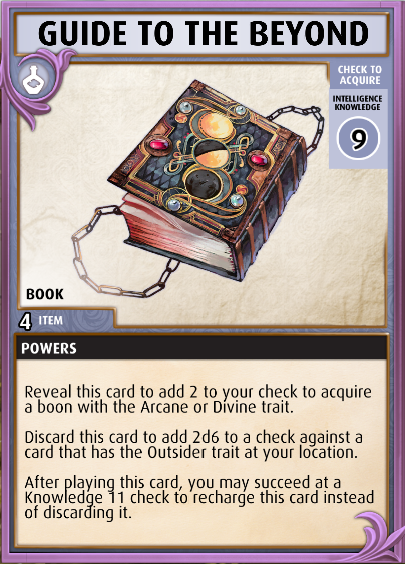 Outsiders are starting to show up in Deck 4, but really start to come into their own in the later decks. Incidentally, this book is an original piece by Hannah Kennedy, who joined our team a few months ago.

If you bought the Rise of the Runelords, you also will receive the Birdcruncher Crown promo card. 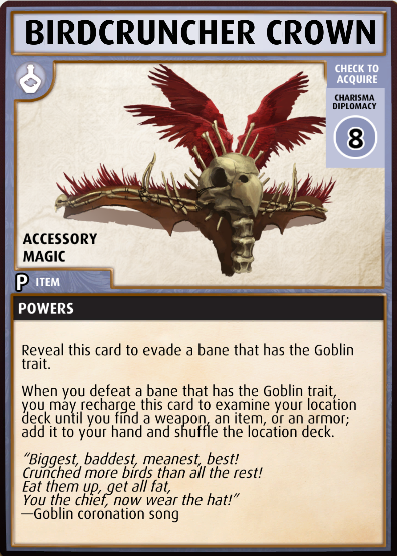 This card is a great fashion statement AND is a fantastic way to get the most out of Burnt Offerings scenarios.

One additional, but important note: We are always listening to your feedback. Since the phone release, we've received a fair amount of it! Our goal is to always make playing the game fun on any platform. To that end, we are fixing bugs and improving the phone interface. We are also adding the option to switch back to a tablet-style interface if you find that our phone UI is just not for you.

Alright, back to work!