Anime and Manga - I won’t allow your bones to stay on this planet. I will banish your evil soul. 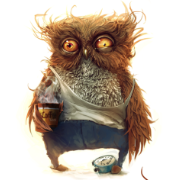 By Sarex,
July 29 in Way Off-Topic