I started my Cipher solo run and... i am quite frustrated, charm/domination not working when it's the only enemy alive may sound good, that's not even a problem for me... but why? There are more CC abilities that work against "all remaining enemys"?

But that is not the Problem here.

A Strategy i had was: charm/dominate some enemys and run away, let them kill each other... however that didn't work, when i got out of range for the enemys, the charm simply stopped... okay, looks good, no easy way to abuse it - if it wasn't so hard, sometimes i was using hit and run against one enemy while most enemys where fighting with the charmed monster... charm simply stopped, i got killed.

I accepted that charm is a tool that is not intended to help in hit and run fights...

but the last case i had was too much, i was fighting 6 enemys, used "ringleader" took 4 enemys, had my figurine out... was shooting with my bow... and the fight simply reset (figurine deactivates and the auto pause activates)

After that i started some tests... look for yourself and judge if it's working as intended

Start a Cipher, use charm on one wolf, walk around him until the wolfes hit each other, hit the one that is charmed... ANNND you get:

17.x sec should be remaining: 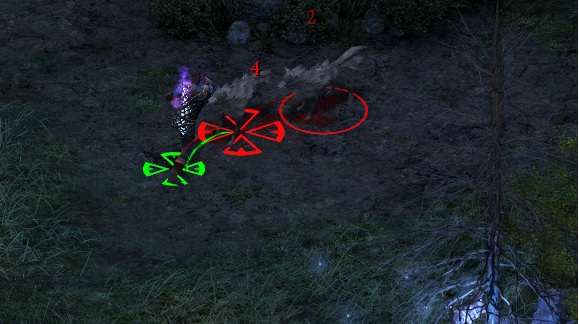 Charm ends prematurely (with Combat reset), nice one, i have to attack the stronger wolf? Why?

Clearly, the checks for "Combat" aren't taking Charm/Dominate into consideration

For those that don't work with Cipher:

If you Charm one Monster the Cipher will still target the Charmed Monster, leading to the Problem that you have to manually change the target or the System could restart the fight, if you are unlucky with the aimbot (sure, it could be a good for you to get your "focus" back, but... that is really wrong).

A Situation that can easily happen:

Charm a wolf, don't look at the cipher (auto target the charmed wolf, with a bow) get Calisha killed, the wolfes will (most cases, tested it once) start hitting each other, fight will reset... easily more situations possible, much more... targeting the Charmed Monster is a good Strategy... but... it can lead to the resetting of a fight (the poor Chanter that to start Chanting from zero...)

Another thing: Flanking, enemys can't be flanked by you+charmed Monster, i don't know... should be possible...