Okay!  I am not an expert on the game mechanics, but here I go:

So I am having a hard time finding info but I am running into this experience where my Dual Wielding character keeps attacking over and over again with the same weapon. See screenshot below - 6x and more with a dagger: 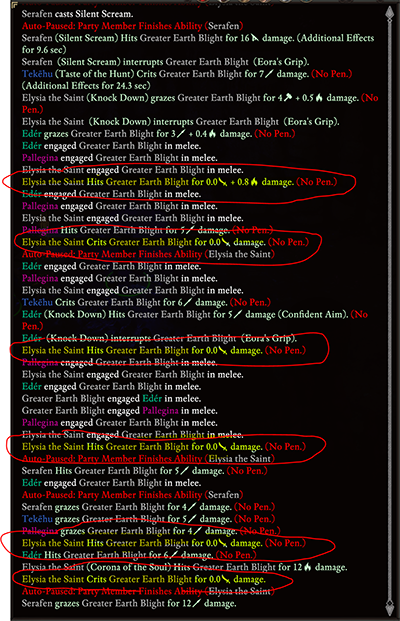 I am using two weapons of the same speed. See attached screenshot of the weapons I am wielding.  So sometimes it is stuck on one and sometimes the other.  I thought maybe it was choosing the best weapon to attack with, but if you look at the dagger attacks, well no pen so that theory is out.  I don't think this is normal.

So as far as I can tell it starts to happen right after Pelligina activates "Shared Flames" - I am tired or would do more testing.  I would also note that the animation for "Shared Flames" continues even after it expires for my character.

So I ran some tests on my "Shadowing Beyond" skill as I notice I tend to miss with this skill a bunch - which is a bummer because I am trying to get the backstab damage - so I started looking at accuracy and I noticed that my character when invisible isn't getting the Accuracy perception bonus from Disciplined Strike.  Is this normal too?  Sorry just don't know the finer details.

Link to a saved game, screenshots available, any help in this is greatly appreciated

EDIT - so ignore the strike through comment about Shared flame - I tested, though the animation stays in effect even after shared flame expires.  I actually have no idea what causes the dual wield issue.  I am providing a save game right before a battle and the one above is right after

PS - I also tried severing the binding with the soulbound dagger, and trying other weapons, still same thing.  Also, Serefan is dual wielding the Thundercrack Pistol and an exceptional pistol and he fires twice in a row but the combat log indicates both shots get the Crackling Shot bonus not sure if this is normal, so I put a blunderbuss in the other hand opposite the Thunder Pistol, and he fired twice with the Thundercrack pistol ... so I am thinking it has to be a bug with dual wielding??

PSS - you should make the Skuldr's poison a lot stronger, it would make the underground city crazy fun ... sorry off topic ...

“How do you 'accidentally' kill a nobleman in his own mansion?"

24 answers to this question