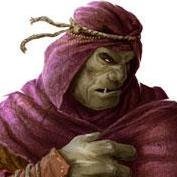 During the quest A Glimpse Beyond, fighting the Scourging Blights.

They display as having 9 Armor, 7 Armor against Bludgeon/Burn, and Immunity to Lightning.

The sources in question...

Lord Darryn's Voulge does Slashing/Lightning damage.
Thundercrack Pistol does Piercing, but also has a special effect of doing a percentage of its damage as Lightning.