3. At level-up, make sure you select Biting Whip as one of your talents.

5. Land a hit during combat and check its damage breakdown by holding shift while mousing over the combat log entry. 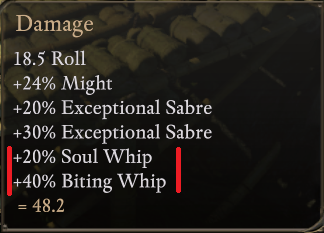 Dam ninja'd me on the bonus issue I mention below— https://forums.obsidian.net/topic/94674-skill-cipher-biting-draining-whip/

2. Create a multiclass character with Cipher as its second class.

4. At 4th level, select Biting Whip and hit next; now the game will let you pick a second ability for this level up.

5. Observe that you can pick Draining Whip even though you've already taken Biting Whip.

Biting Whip + Draining Whip stack with each other. In combination with the bug above, this gives you 20+20+40= 80% extra damage on top of 20% more focus gain.