Chant glitches are still in game and they happens VERY OFTEN!

But here it is, I have a screenshot, savegame and some explanations here.

So finally, You will be able to reproduce at least two problems related to that ugly situation.

So, please, excuse my English, I am doing my best though and let's get started. 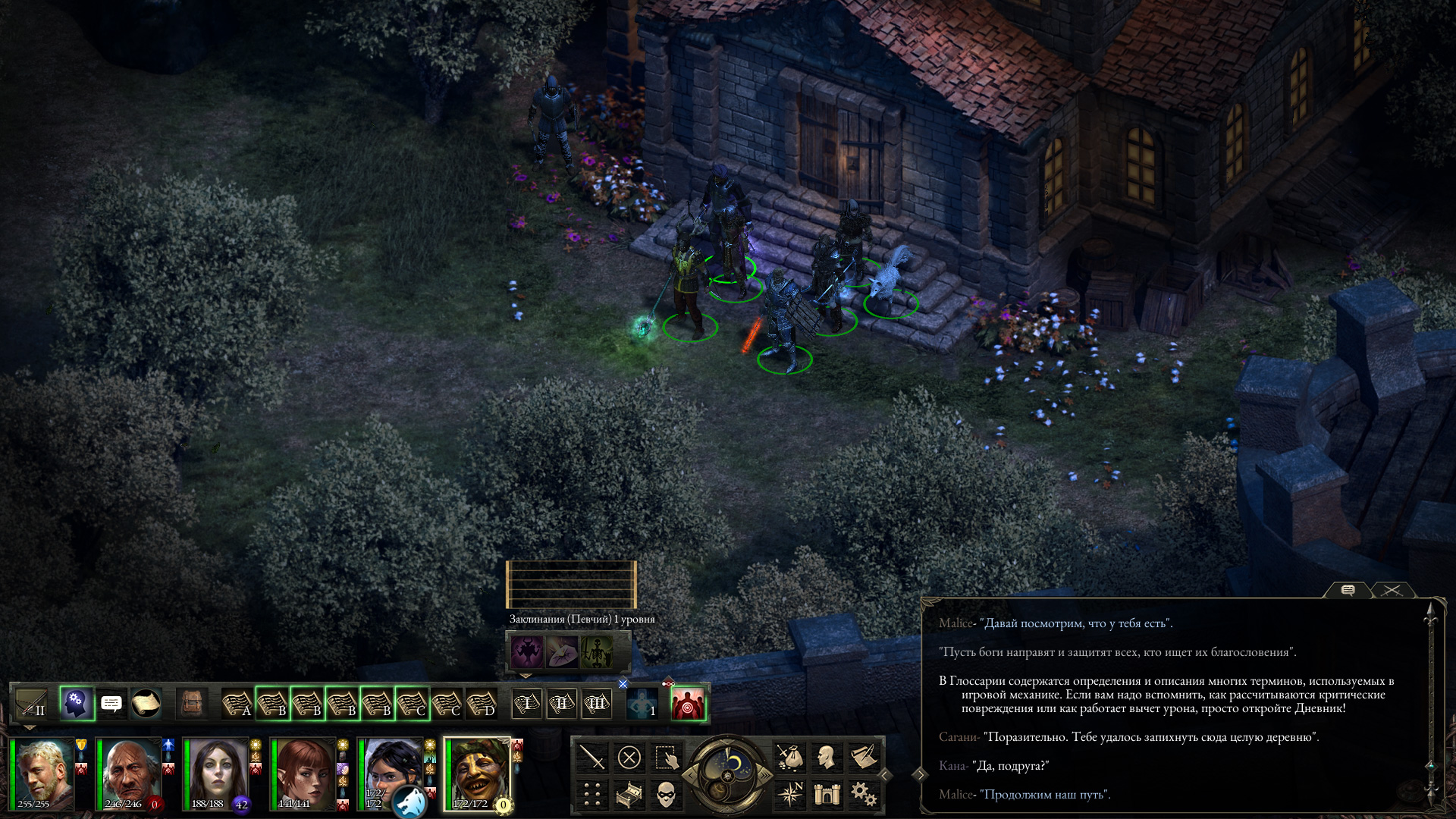 Game was started and played with Russian localization.

1. I retrained Kana, made new chants and named chant "C" as "Ranger" and chant "B" as "Fearless", chant "A" name wasn't touched.

3. Launched the game, loaded last save, recruited Kana back into group, jumped to few locations and then noticed Kana's bar.

"Стрелы Миноретты" is Russian localization for something like "Minoretta's Arrows" or "Arrows of Minoretta", but I haven't found anything related to it on English wiki pages. This name is automatically assigned (for some unknown reason) to chant with "Sure-Handed Ila Nocked Her Arrows with Speed" phrase at first place. I haven't touched chants when I encountered this problem this time, so You can check all of this in savegame posted below.

All "B" chants on screenshot have equal names "Fearless", which I set at the same time as I set name "Ranger" for "C" chant. My game language set to "Russian" and yes I have used English names for chants such as "Fearless". I thought that would help me to avoid that glitch, but... no, it doesn't. I told You at the very beginning of this post that this glitch happens very often.

So then I tried to reproduce the problems described above from this saved game and looks like I found the core of this.

2. Launched the game again and loaded that save I have posted above.

3. All "B" clones are gone, but two copies of "C" chant with different names (one active and one not active) are still present.

Nice, at least one problem is still in place. You may load game in English or not English localization it will be here anyway (tested with English and Russian localizations).

So, how to reproduce that "B" chant clonalization from my savegame. Best way is to:

2. Move to a different location. That building behind group members is ok, so just click on doors.

3. Go back and recruit Kana back to group.

5. Do it again from step 1 to step 4 and Kana will have three active icons of "B" chant and so on.

IMPORTANT: Game language must be set to something different from English (tested with English and Russian localizations). This clonalization is not reproducable if game language is set to English (Just do it twice for English locale).

Chant "D" was also touched at the very beginning of this and named as "Fire". It looks nice at first moment. But after those tests listed above,

1. I set game language to Russian.

3. Did steps 1-4 from "B" chant testing (dismiss Kana, enter building, leave it, recruit Kana back).

4. Chant "C" problem with double icons is still in place but they both inactive now, and chant "D" started to clone itself instead of chant "B".

Also in chant editor, chant "C" cleaned itself to have only "Sure-Handed Ila Nocked Her Arrows with Speed" phrase and autonamed now as "Ranger"... Pure magic. o_o

Update: chant "D" default name is also "Sample chant 2", tested both in Russian and English, just cleaned names on "B","C","D" and they all named as "Sample chant 2" in English and "Пример распева 2" in Russian.

So, chant "C" has connection to chant "B", something definitely wrong with that chant (Please, note active icons for chants "B" and "C" at the game load of savegame posted above). Chants "B" and "D" have same cloning problems. So what about chant "A"?

Chant "A" default name is "Марш Камоа" which is "March of the Kamoa". It is named as "Марш Камоа" in savegame listed above. Remove that name and it will be "Марш Камоа" again while game language is set to Russian. Renaming works perfectly and no cloning issues. I made it active and did steps 1-4 from "B" chant testing - no problems...

1. Set game to Russian, and load savegame posted above.

2. Open chant editor and set name for chant "A" to something like "asdasd" and make it active.

3. Do steps 1-4 from "B" chant testing (dismiss Kana, enter building, leave it, recruit Kana back). Just do it TWICE.

4. Chant "A" start to make clones of itself.

So yeah chant "A" has some protection, lol, but can be broken also.

Update. Chants "A", "B", "D" can be cloned even when game is set to English. That "Just do it TWICE" works against English localization.

Attached output_log.txt made for testing with English locale. "B" chant was successfully cloned.

Well. It is 2019 now, I know. Few years have passed and Deadfire hits place long time ago, but I still love that game. So, well, I hope You Obsidian guys will finally fix that glitch, because it seems that it is possible now.