I hope I have formatted it in a proper manner and everything is comprehensible.

- when cycling through options at a start menu, names of each categories (Graphics, sound) will disappear when clicking on anything except Auot-Pause or controls
- also, in controls, when you scroll down through them, dents, which separates them, will appear later.
- In autopause, I could not find option to pause after end of the round - where is it?

Game itself:
- if you leave game running longer and you are not playing it (pressing windows button on a keyboard and doing something else), and then return to it and load a game, it will load indefinitely.

- When in Barter screen - for example, when speaking with the man who owns the dyery with the collapsed roof in Dyrwood village - after clicking on question mark symbol and opening a description about item, instead of "close" button it says "enchant".

- When I speak with somebody, and there is "requirements not met" for certain answers in the dialogue box, when I come back with a character who meets the prerequisites, I still can´t access these sentences.

-character pathfinding (especially with priest) is not good yet - they keep stucking at objects sometimes.

- When putting Finest Arbalest to BB Fighter, it is offset way off his arms in the 3d inventory model

-also, for some reason, there is ghastly apparition of my own character in a Winfrith´s Armory Shop, after I returned from Stormwall Gorge

- When fighting Feral Druids, effects of their spells (that green goo on the ground) doesn´t disappear with some "effect ends" animation - it just disappears.
- Also, bodies are disappearing. I know this is probably because of performance reasons, but I think they should stay.

- even when I scouted the area with my party, after loading there is "fog of war" as if in unexplored area.

- Characters sometimes does not break up form the animation, instead they are doing it in a loop for certain time - my main character did not break form attack animation even after the enemy was dead. Only after certain time he did so.

- Stealth system: I don´t know if I get it right, so correct me please, if I am wrong: once in stealth mode, grey circle will appear around you. Enemy NPC will have yellow and red circle. Radius of these depends on your stats, etc. Yellow serves as touch point, where, if your grey circle will intertwine with the yellow one, that NPC should start going in your direction to investigate, because it heard a sound, right(And I guess red one means fight - your too close to their personal zone)?

- The Stash - although I liked the Stash system on paper, I don´t like it at all implemented here, in game - it happened to me sometimes that I put into stash items which I wanted to take out - and I could not, unless I am in resting place, or some such.
It seems more restrictive than fun. Please, modify/remove it.

Well, then how it is possible that sometimes, enemy NPCs are going to investigate when these circles did not intertwine?

- Combat in general is too fast. It needs slowing down. Also, if characters and NPCs can overlap, as they can right now, it is just chaotic and many times you can´t even see the enemy (!) behind the bodies of your own team, so you cannot click on him/her/it, once the current one is dead.

- Corpses should stay, at least till you leave the area.
- sometimes, when you press "Take all" button, it won´t, despite your character having a free place in the inventory
- sometimes, when taking items from stashes or loot drops manually (one by one), items will just disappear instead of being transferred into your inventory.

Map:
- I remember from IE games (Icewind Dale 2), that, once in a local map, it was still possible to double-click on walkable places and your party would get there. Would it be possible to implement even in Pillars of Eternity ?

- Also, it seems that if you wanna access a location on the north from the place where you currently are, you have to use the Northern exit (Dyrwood Crossing location appeared to me only after going through SouthEast exit from Dyrwood) - which I find very impractical, can you make it, please, that the locations would be accessible, no matter which exit?

Thank you, Obsidian. To conclude this, from what I saw, I consider PoE cca. 60 percent complete, the rest still needs tweaking. 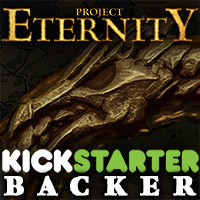