The Records are a nice way to see who deals damage, who doesn't - at least it could be, i really want it to.

However some things just... don't count, damage dealt? The animal companion for Ranger, the Summons for Chanter - don't count, thats... not a low amount of damage not recorded - however you can understand that part - a bit. However the next part is a little bit harder to understand: Chants don't count either - meaning, the main damage the chanter deals doesnt count.

Here is an example what it means: 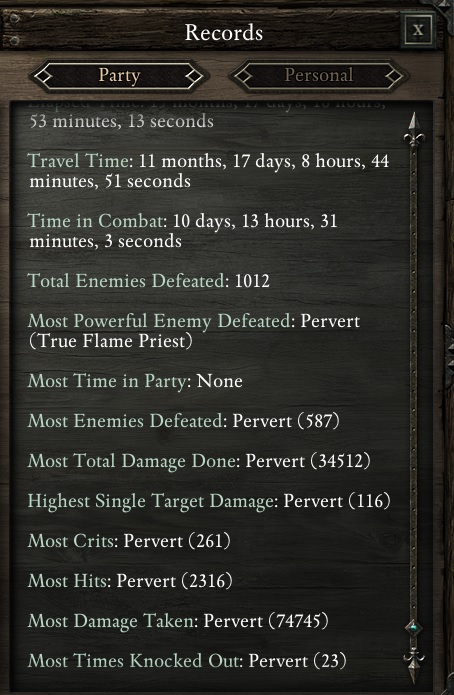 That is a screenshot of the records my solo naked chanter had right before thaos - he finished the main story wm1 and wm2... defeated 1k enemies... and dealt around 35 damage per enemy?!?!?!?!?!?! Even if you only take the enemies he himself defeated... you are left with around 70 damage per enemy... i know, i know, some enemies dont have much endurance, however 12 eyeless hammer, 7 Ice Trolls, 6 Ogre Matrons, 29 Crag Ogres (all 3 together) and i am already at 25k endurance (no healing, no POTD (since the Bestiary doesnt show potd stats if i read it right)) - lets add the Battery Guards and Battery Sirens and i am at 30k.

I'd really love to know how much damage i dealt, i figure the number is 10 times higher (i know that not every kill was counted, so even the 1k enemies killed is wrong) maybe even higher than that...