How do I get in and out of the lab without getting mauled? 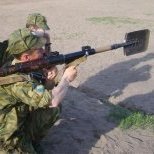 By AndJrew76,
August 4, 2020 in Grounded: General Discussion (NO SPOILERS)